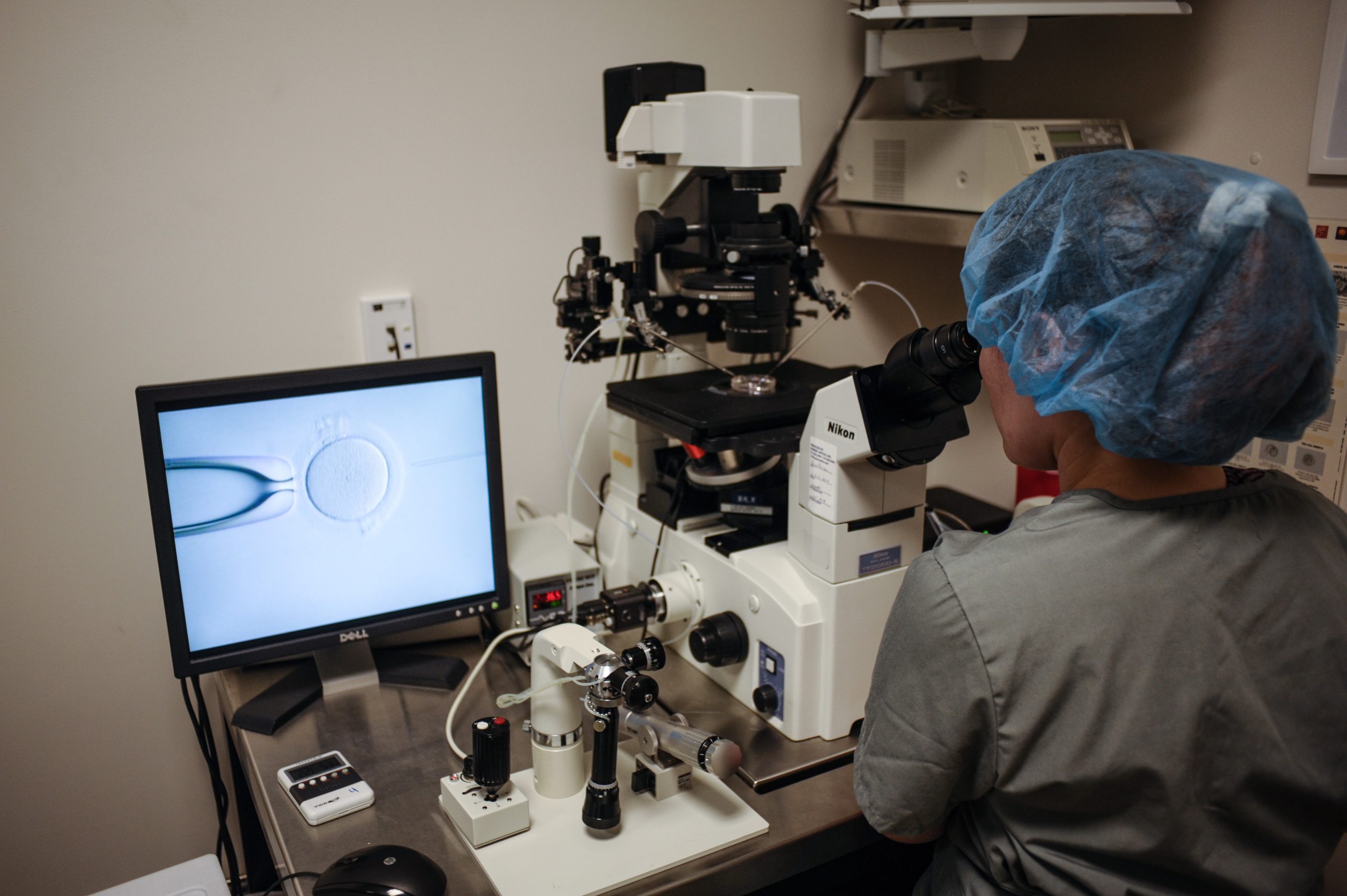 It took two years, two egg retrievals, and three frozen embryo transfers (not including the one that was canceled) for my husband and I to conceive our daughter—not that anyone’s counting.

When we initially discussed our future together, both of us envisioned a family of four. But nearly a year into this parenting journey (and countless mass shootings and global pandemics later), we’re unsure. Nevertheless, our options remain open as we have two genetically-tested normal embryos in cryopreservation. Or at least we thought.

With the Supreme Court’s recent decision to overturn Roe v. Wade, the future of our family hangs in the balance as it does for many people who’ve used fertility treatments to start or grow their families—people like Becca from Texas, who asked to be identified by her first name only for privacy. Becca used in vitro fertilization (IVF), the most common form of assisted reproductive technology, for both her three- and one-year-old sons and has one viable embryo in cryopreservation, a process that uses very low temperatures to preserve cells and tissues .

While she’d never planned to have more than two children, she’s unsure what she wants to do with the remaining embryo. Last year, Texas passed a law that expanded its definition of an unborn child to include embryos, stating that life begins at the moment of fertilization.

Although a review by the American Society of Reproductive Medicine (ASRM) states that Texas’ trigger law “does not appear to be applicable to IVF and reproductive medicine services prior to implantation of embryos,” it is unclear whether “live unborn child” applies to frozen embryos and whether people could “argue that discarding an embryo or donating an embryo for research use is an intentional or attempted killing of a live unborn child.”

“It’s assumed I’m cold-hearted if I were to discard my embryo, right? It’s assumed that I don’t love that possibility of a child,” says Becca. “But I don’t think people understand it until you’re in it. [Infertility] is a struggle and this just makes it harder. Your choices seem more and more limited and they were already difficult enough.”

The financial and emotional costs of IVF

According to a 2020 study, nearly 2 million embryos were cryopreserved between 2004 and 2013. Of those, more than 700,000 embryos were transferred to a uterus for pregnancy. Before the overturn of Roe v. Wade, fertility patients had five options regarding disposition of their embryos: save them for a future transfer; donate them to research; donate them to another patient; thaw and discard them; or continue to store them in cryopreservation, an option that can range between $600 to $800 per year, according to Dr. Jaime Shamonki, chief medical officer at Generate Life Sciences.

Now it’s unclear whether discarding embryos will count as an abortion as bills are being introduced that define life as beginning at fertilization—a move that would grant embryos personhood and rights.

And it’s not as though the seemingly simple option of moving an embryo across state lines is cost-effective, with the process costing between $1,000 to $2,000 to transport embryos between two locations.

“The primary cost is that of shipping the embryo, which is best transported with a next-flight-out medical courier service that will ensure proper handling and temperature monitoring of the cryogenic tank and its contents,” explains Shamonki. Fertility clinics may also charge an administrative fee associated with packing and preparing the embryos for shipment. Then there’s the travel fees patients would incur for seeking medical care outside their home state.

While Becca has not made a decision about what to do with her remaining embryo, she is hesitant about getting pregnant again due to the C-sections she had for both births, plus complications during her second pregnancy, and the fact that she is in her late 30s.

“If I were having a natural pregnancy, there’s no way I’d be considering having a third, but because there’s an embryo sitting there, it’s hard to turn your back,” she says. “It’s already a hard decision to make and then to have some political guy tell me what I can and can’t potentially do with my kid? It’s frustrating. It’s hard.”

Dr. Kara Goldman, associate professor of obstetrics and gynecology in reproductive endocrinology and fertility at Northwestern University Feinberg School of Medicine and medical director of Fertility Preservation at Northwestern Medicine, empathizes. She believes that healthcare decisions, especially ones as “intimate and private” as reproductive decisions should be made “based on science and between a physician and patient, not politicians.”

“When it comes to something as critically important as reproductive healthcare, the decisions about how someone builds a family, when they build a family, with whom they build a family and when to terminate a pregnancy, these decisions are so private and nuanced and complex that to insert a legislator into this decision-making adds barriers and burdens that a patient should not have to consider,” says Goldman.

What personhood bills could mean for embryos and patients

Given that the first baby to be born via IVF was in 1978—five years later Roe v. Wade went into effect—fertility doctors haven’t practiced the assisted reproductive technology without the protection provided by the law. All of that could change.

“This would have dramatic implications for the way we practice IVF and the huge number of embryos that are currently cryopreserved,” says Goldman. “In most states right now, embryos are considered property, but if personhood bills are passed that would determine life begins at the moment of conception, or fertilization, then that would dramatically alter the way doctors practice IVF.”

During the egg retrieval process of IVF, the goal is to stimulate the ovaries to retrieve a significant number of eggs. More eggs means more chances of fertilization, which would ideally lead to a higher number of embryos to select for pregnancy. However, new personhood bills would mean that all embryos created in IVF cycles moving forward would have to be transferred back to a patient, explains Goldman.

“So many embryos will not yield a healthy pregnancy, so we have to select the best embryo for transfer. If we have a young patient going through IVF and we inseminate all of the eggs retrieved, then we have to transfer back all of those embryos to the uterus because they can’t be frozen or discarded,” she says. “That young patient would be at a very high risk of multiple gestation, which could mean triplets or higher order multiple pregnancies, and that is of significant risk to that patient and those fetuses.”

On the other end of the spectrum, if there is a reproductively older patient (typically defined as those 35 and up) and only a small amount of eggs are retrieved and all of the embryos are transferred back to the patient, there’s “a very high risk that a patient doesn’t get pregnant,” or a “very high risk of transferring back a chromosomally abnormal embryo that could yield a child with significant disabilities.”

“We practice IVF and practice reproductive medicine based on decades of science that have made this field so much safer and so much more effective,” shares Goldman, adding that embryos are typically transferred one at a time with the remaining ones frozen to give the patient the option of “building their family to the size they are hoping for in the safest way possible.”

Goldman is also concerned about how new laws could impact the management of early pregnancy complications, such as an ectopic pregnancy, which occurs when a fertilized egg implants and grows outside of the uterus.

“I don’t want to have to transfer 28 embryos. I’m older, so it took that many embryos for me to get eight euploids [a chromosomally normal embryo],” Jeelani shares. “And to transfer the embryos and know you’re going to miscarry or they’re not going to implant, the concept and premise behind it is so scary.”

As it stands now, the ASRM believes it would be premature to consider moving embryos as it’s unclear exactly how many states’ abortion laws will pan out.

“At this point, it’s still at the threat level,” explains Dr. Eve Feinberg, an expert in reproductive medicine and an associate professor in obstetrics and gynecology at Northwestern University Feinberg School of Medicine. “There have actually been laws enacted that deal with embryos, but it is a very fine line between these fertilization laws that define life beginning at fertilization and it has the potential to impact embryos because we fertilize eggs in the laboratory.”

So far, there are 13 states that have “trigger laws” that would restrict abortions: Arkansas, Idaho, Louisiana, Mississippi, Missouri, North Dakota, Oklahoma, South Dakota, Tennessee, Texas, Utah and Wyoming. While embryos can be moved across state lines at this point without restrictions, it’s not clear how that would change, if at all, if personhood laws are enacted, says Goldman.

For now, IVF patients like me and Becca are advised to “hang tight” and see where the laws land.

“I think with anything, there is always going to be a workaround. Patients are always going to have the ability to move their reproductive tissue into a more friendly state, but it comes with a cost,” says Feinberg. “The reality is that it’s an additional burden on top of the extraordinary burden patients have been through in order to have a family. That’s the irony of this … the laws are placing tremendous burdens at both ends of the reproductive spectrum.”