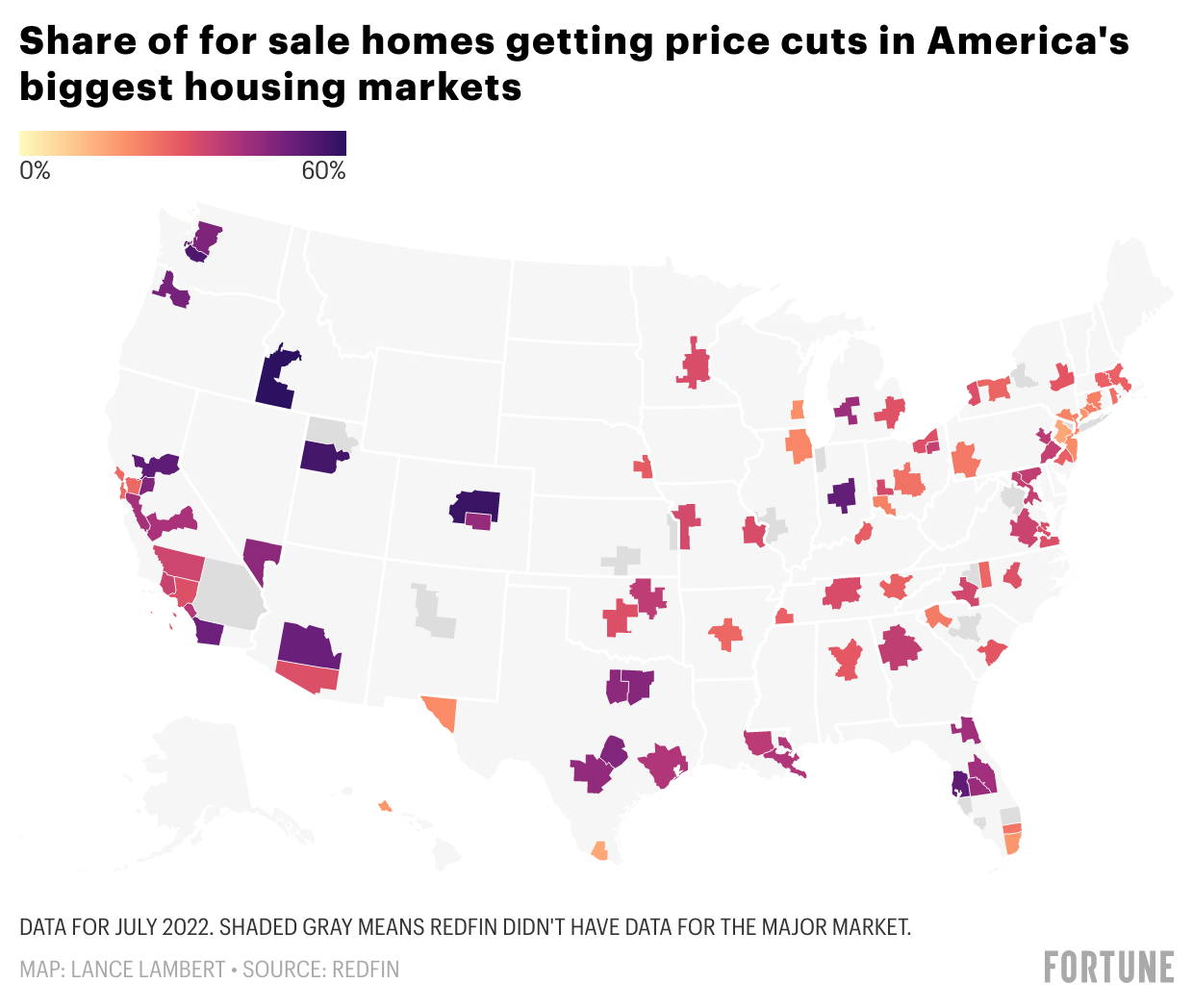 The Pandemic Housing Boom saw US home prices spike an unprecedented 43% in just over two years. But that’s over now: Spiked mortgage rates have pushed the US housing market into a sharp slowdown that could threaten some of those gains.

Some firms—including John Burns Real Estate Consulting, Zonda, and Zelman & Associates—are already predicting that US home prices in 2023 will post their first year-over-year decline of the post-Great Financial Crisis era. In a sharp housing downturn scenario, Fitch Ratings thinks a 10% to 15% national home price decline is possible. Not everyone agrees. Goldman Sachs and Zillow predict that US home prices will rise another 1.8% and 2.4%, respectively, over the coming year.

While industry insiders are still debating whether national house prices will post year-over-year declines, there is a consensus that some regional markets will see price declines.

“Nationwide, the share of homes for sale with price drops reached a record high in July. Sellers had to cut their prices because they were catching up with buyers, who had come to expect lower prices amid a cooling market. Rising mortgage rates and the prospect of falling home values ​​also made buyers hesitant to pay sky-high prices, and an uptick in supply gave them more to choose from. Price drops are likely to flatten out as sellers come to terms with the shifting market,” write Redfin researchers.

The regional housing markets seeing the highest share of price cuts are in the very places that saw the biggest price gains during the pandemic. Just look at Boise. During the Pandemic Housing Boom, prices in Boise soared over 60%. But as the market shifted, Boise got hit the hardest. In July, 70% of home listings in Boise saw a price cut. That’s up from 30% in July 2021.

Why are Mountain West and West Coast markets shifting so fast?

“The strong demand over the past two years drove up home prices across the country, and it appears the West hit the pricing ceiling quicker than other markets given the particular supply constraints,” Ali Wolf, chief economist at Zonda, told Fortune.

The data seems to agree with Wolf.

Regional housing markets that became the most detached from underlying economic fundamentals are now cooling the fastest. Places like Boise and Austin saw home prices rise to bubbly levels amid the Pandemic Housing Boom. Once historically low mortgage rates disappeared earlier this year, would-be buyers in those markets began to feel the full brunt of record home price appreciation. That’s why this summer many shoppers, in places like Boise and Austin, called off their search.